Female Entrepreneurs Before and After Start Path Empodera 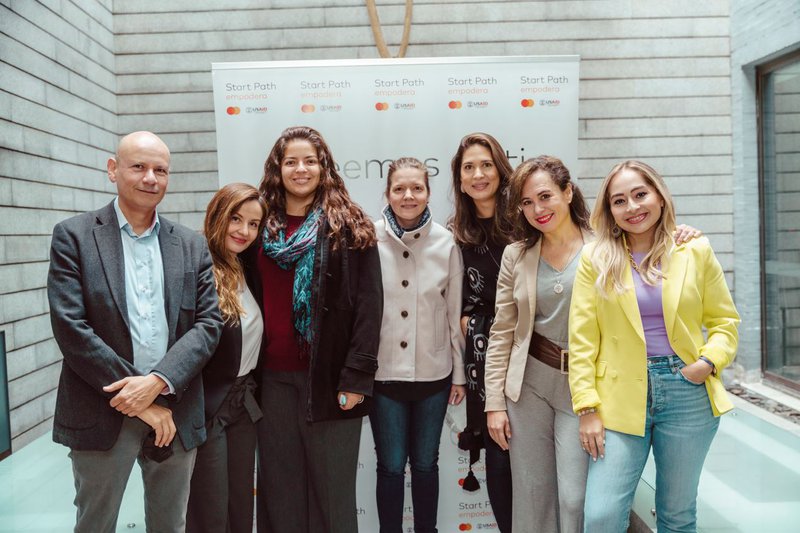 "By helping to close the gaps, you build a better place for your customers." - Mónica Ramirez, SPE participant

Mastercard and USAID launched Start Path Empodera (SPE) seeking to advance women’s economic opportunities and foster a more inclusive digital economy in Latin America. "I applied to SPE not believing that the gender focus would be of value to me," admits Mónica Ramirez, the founder and president of TowerTech Americas, one of the companies selected to participate in the accelerator program. Before beginning the program, Mónica was unaware of those structural barriers (i.e. access to capital, markets, networking and mentorship) that prevent women from competing on equal terms in the entrepreneurial ecosystem. “I never realized [the inequalities], and that makes us part of the problem,” she explained.

TowerTech Americas specializes in adding value to point-of-payment transactions through helping businesses transform the time they spend on face-to-face payments into more types of transactions. Mónica knows that each payment in a shop can be followed by services such as automated inventory control or financial calculations without having to wait for an accountant's review. TowerTech Americas has recently been working with the public transport sector in Colombia; "A bus is also a store where the driver is the cashier. The ‘cashier’ is where we can add value," explains Monica, “thus, the information obtained from passengers who pay with their cards reveals user mobility patterns. The data allows us to implement different strategies, from discounts for transfers to two-for-one offers to attract more demand” outside peak hours.

Thanks in part to the experiences of other women entrepreneurs in the SPE program, Mónica began to recognize some inequalities she had not noticed previously, such as the lack of support networks for businesswomen and the male majority in the technology industry. "I had an unconscious gender bias," she added in relation to her ability as a woman entrepreneur, "I have always been alone... I felt like a mermaid, a mythical creature. One never knows if there is another." This solitude, due to the lack of female role models, led to a fear of failure and prevented her from taking certain risks like pitching her company in Silicon Valley. She admits that she suffered from imposter syndrome, a psychological condition that leads people to doubt their abilities, fail to recognize their accomplishments, belittle their self-worth, and harbor a persistent internalized fear of being exposed as a fraud. While it is a situation that can be experienced by both men and women, it is more often found in women because they tend to focus more on their inadequacies and less on their strengths. Consequently, women feel they are taking the place of someone more deserving and are less likely to achieve their goals. "This syndrome would lead me to say to myself, ‘[if she’s] silent, she looks prettier because she never shows how much of a failure she is,’ " explained Mónica .

One of the most vital learnings from the program for Mónica was better understanding inequalities faced by women business owners. Interacting with very strong women entrepreneurs who, despite sharing in some of her fears, continued to conduct business and grow, led Monica to decide to travel to Silicon Valley and pursue launching her company in the United States. One of the most important lessons learned was "the overwhelming power behind female unity," she said. Not only did she learn how important a network of women can be, but also that is it is vital to encourage more women to become part of the teams working in the fintech sector. "I decided to hire more women," Mónica explained because "by helping to close the gaps, you build a better place for your customers."

Lina Restrepo, co-founder and CEO of Prisier, another company selected to participate in SPE, also took an interest in closing gender gaps. Before becoming an entrepreneur, Lina was employed at a pricing consultancy firm dedicated to multinational companies. After working for a few years at the firm, she said she was "bitten by the bug of what happens to the smaller start-ups with no one to take care of them.” She set out to develop a technological tool that would help thousands of start-ups launch their businesses.

Prisier created Wikipricing, a platform that helps determine the best price to charge for a good or service. "Businesses are focused on lowering fixed costs; lowering those costs by one percent only brings two additional points to operating profit. On the other hand, improving the average price of the portfolio by one percent increases operating profit by up to eleven percent," Lina explains. “Imagine telling a hairdresser she can sell a haircut for 14,000 pesos instead of 12,000. Or telling a restaurant they can sell their dish for 29,000 pesos instead of 25,000."

Lina’s company proposes a different methodology than what businesses have used for pricing in the past: "In traditional pricing, people ask how much it costs to do something, and how much they wish to profit. What we do is make optimal pricing decisions taking the customer and the competition into account; in other words, we assess the value the customer perceives for a product and then assess the market." Lina wants to offer this service to small businesses because it is the principle model tool used by the world's largest corporations. At Prisier, "we want this to be social in nature," she added.

Prisier believed that the SPE program could help them scale Wikipricing, obtain more investments and reach new companies. Although Lina and her partners were reluctant to seek new investments at first, “our mentors helped us understand that equity capital would only get us so far and that we would need investment to take the platform to the next level,” said Lina. “We joined SPE with the thought of reaching thousands of companies. We are now looking at millions. We set the flag higher." Lina says that her time in the accelerator program gave her "confidence to trust their story more strongly," among other reasons, because they connected with companies that validated their belief that their pricing tool is crucial and filling a gap in the market.

Like Mónica, Lina also admits that she had never identified gender gaps in the entrepreneurial environment. "It was at SPE that I realized that, in five years of sitting with client management teams, I had only one meeting with an all-female team." She also says, "I understood that I had been discriminated against because I was a woman, which was something I didn't realize at the time." Lina recalls that for years, for example, she was denied corporate credit cards, although she ran a debt-free and profitable company, while businessmen around her (e.g. her brother, husband and acquaintances) had no problem accessing these types of financial products.

And finally, Lina’s experience at SPE helped her discover "the female power in company development, and our sisterhood." Lina decided to offer her pricing platform free of charge to 300 women entrepreneurs in Latin America explaining that "if we secure the right price in 300 women's businesses, we are going to positively impact the profitability of those businesses and their livelihoods."